There is very strong but inconclusive evidence that Lance Corporal Marsden was one of the two men who survived the atttack on Deborah and was led to safety by the tank commander, 2/Lt Frank Heap.

Why do we think this? Because David Marsden’s name appears on two key casualty lists for ‘D’ Battalion 9 in 1917.

The first was for August 22nd, when Deborah’s crew was transferred to a ‘G’ Battalion tank after Deborah was disabled during the Battle of Passchendaele in the Ypres Salient in Belgium.

The second was for November 20th, when Deborah was finally knocked out at Flesquieres in France.

This could be coincidence, but what makes the connection compelling is the fact that two significant names also appear on the August list. One is 2/Lt George Ranald Macdonald, who was Deborah’s commander in Belgium, and the other is Private Walter Robinson, who lies buried in Flesquieres Hill Cemetery, and who we believe was Deborah’s fifth fatality.

We believe there is a very strong possibility that David Marsden and
Walter Robinson were injured when Deborah was hit in Belgium, under the
command of 2/Lt Macdonald. But they were able to remain on duty and were
transferred to France, to rejoin the Deborah crew for the attack on
Flesquieres, this time under the command of 2/Lt Heap. There, on
November 20th, Marsden was injured again. Robinson and four others died. 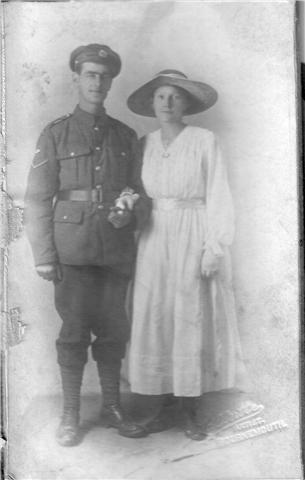 David Marsden was born on November 25th, 1887, at Elland near Leeds. When war broke out, he was a butcher, living at 8 Mayo Street at Cockermouth in Cumbria. He enlisted in March, 1915, into the Royal Field Artillery. He later transferred to the Motor Machine Gun service (No 9 Battery), then the Machine Gun Corps, the ‘D’ Battalion Tank Corps.

His service record suggests that he was posted as Lance Corporal on November 20th, 1917, the very day Deborah went into action at
Flesquieres, and he’s described in the files as a ‘tank driver’.

He returned to England for hospital treatment after surviving November 20th, and his family say he never saw combat again. He married Effie Grave in Cockermouth in September, 1918. His discharge papers for March, 1919, refer to ‘disability and anaemia’.

Back in Cockermouth, David and Effie had four daughters – Margaret, Effie, Joan and Hilary. Their daughter Effie married Richard Melliar-Smith and together they had three children, David, Stephen and – by an extraordinary coincidence – Deborah.

David Melliar-Smith provided the pictures of his grandfather. He says the family believed David Marsden was a Gunner, and survived on November 20th because at the moment the shells hit, he moved back to get more ammunition for his machine gun. This conflicts with the service records, which describe David Marsden as a ‘tank driver’, but it’s possible the crew exchanged roles in the heat of battle.

David Melliar-Smith says: “At some time in the 1950s, I recall him telling me about the piece of shrapnel that was lodged underneath his diaphragm. He was X-rayed at Guy’s Hospital, where they found the piece of shrapnel, but decided it would be too dangerous to remove. He also told me that for years after the war, they were still taking metal out of him”.