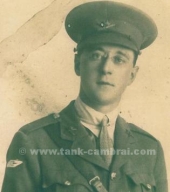 2/Lt. Frank Gustave Heap was the Tank Commander of D51 Deborah, the Flesquières tank. Frank Heap was awarded the MC for guiding half his crew to safety after 4 of his crew was killed and Deborah disabled by shell-fire. Before the war, Frank Heap won a scholarship to read History at the University of Cambridge, where he was a sporting Blue. After 1918, he ran a hotel in Blackpool and became a renowned mountaineer. He also wrote a book about petrol cars and lorries.