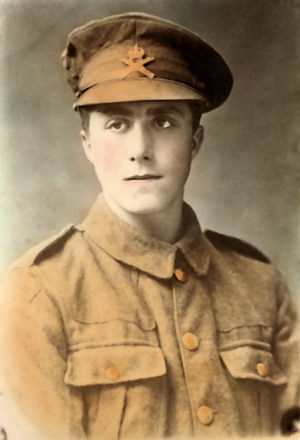 Lance Corporal George Charles Foot, 40342, DCM, of ‘D’ Battalion, Tank Corps, was only three months past his 20th birthday when he was killed on November 20th, 1917.

Within days of his death, 2/Lt Heap sent a hand-written note to his father. Heap said: “We all feel his loss very deeply, for his cheery spirits and unfailing good nature had endeared him to all…It is impossible that a soul like George’s should not go on living. I feel convinced I shall meet him again.”

George had already been awarded a Distinguished Conduct Medal for his part in the battle of the Somme a year earlier, when tanks were deployed by the British for the first time.

His DCM Citation in ‘The London Gazette’ number 29824 of Tuesday 14 November 1916 states ‘40342 Gnr. G.C.Foot, Mach. Gun Corps, ‘For conspicuous gallantry in action. He displayed great courage and determination fighting with his Tank. Later, he remained for thirty hours with a wounded officer under heavy fire.”

George was born on September 3rd, 1897, at 153 Arlington Road, Regents Park, St.Pancras, in north London. His father, Charles Ernest Foot was born in St Pancras and married a girl from nearby Hoxton, Caroline Foot (formerly Todd). The wedding was in the second quarter of 1897.

At this stage, George’s father was a commercial traveller, selling musical instruments, and the family moved home frequently in north London. In 1901, when George was three, the family lived at 61 Etherley Road in Tottenham; his brother Charles was born in Edmonton, and a third brother Ronald in Islington.

At some stage, probably just before the outbreak of war, the family bought or rented a house called ‘The Roses’ at Great Missenden in Buckinghamshire, but also had a house in Anson Road in north London.

Documents in the City of Westminster archive indicate that by now, George’s father Charles was commercial manager for Hawkes & Co, the musical instrument makers and music publishers, which later became part of Boosey & Hawkes.

George must have travelled from the family home in Great Missenden to enlist at Aylesbury; he served in the Welsh Regiment before transferring to the new Tank Corps.

He now lies in grave III.B.5, at Flesquieres Hill British Cemetery. The CWGC register records Anson Road as his parents’ home, but his name appears on a plaque in Great Missenden High Street, and on a war memorial beside the church of St Peter & St Paul.

George’s father Charles died in 1930. His brother Charles died at the age of three, in 1902. His youngest brother Ronald lived until 1979, and died at Whittington Hospital in Islington; Ronald was described as a musical instrument manufacturer. Ronald’s son – George’s nephew – still lives in north London.