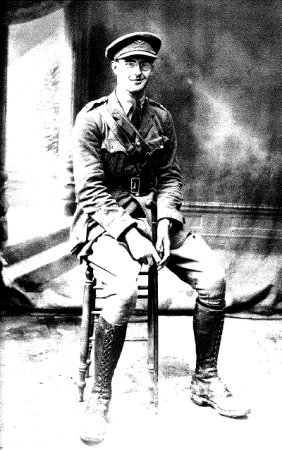 2/Lt Macdonald – a New Zealander – was commander of D51 Deborah during the Third Battle of Ypres in Belgium – three months before the fatal attack on the Hindenburg Line at Flesquieres.

On August 21st, 1917, “D” Battalion was waiting to go into action the following day, near Poelcapelle (east of Ypres), when the Germans launched heavy shelling.
Four tanks, including Deborah D51, were seriously damaged. The crewmen were fit for action, so urgent replacements were organized with tanks from another Battalion. Deborah’s crew was given one of these borrowed tanks.
The next day, just after the commencement of the combined assault involving tanks, artillery and infantry, this replacement tank was hit and immobilized with a broken track. The Commander, 2/Lt Macdonald and several of his men were wounded.
2/Lt Macdonald was sent to hospital in England on September 7th, and then for convalescence, which eliminated him from Deborah’s last adventure at Cambrai.

2/Lt Macdonald was badly wounded – one of three wounds sustained during the war. He was 25 years old. According to the Dictionary of New Zealand Biography, Macdonald had ‘lost all taste for war’ by 1918, and played only a minor role in the Home Guard during the Second World War.

The following details are taken from an article by Richard Greenaway and Graham Miller, in the Dictionary of New Zealand Biography (http://www.dnzb.govt.nz).

George Ranald Macdonald was born at St Albans, Christchurch, on 4 October 1891, the son of Gertrude Gould and her husband, Ranald Macintosh Macdonald. His maternal grandfather, George Gould, had been a leading merchant; his father owned farm machinery and tramway companies. After schooling at French Farm, Akaroa, and Christ’s College, Christchurch, Macdonald studied history at Christ Church College, Oxford. He graduated BA in 1912 and MA in 1919, qualified as a lawyer but rarely practised.

When war broke out in 1914, Macdonald was rejected for military duty with the New Zealand forces because of defective eyesight. He did hospital work for the British Army, was responsible, as a Second Lieutenant in the Army Service Corps, for the transport of cannon, and saw active service in the Royal Tank Corps. His association with D51 Deborah is described above.

On 14 February 1922, Macdonald married Beatrice Mary (Wina) Clifford, daughter of a prominent Catholic farming family, in the family chapel at Stonyhurst Station, Waipara, North Canterbury. After an early farming venture failed, he became a manager of Lowry Hills, Cheviot, a family property he inherited on his father’s death in 1928. They had four sons. Macdonald did much tree planting and established a good flock of Corriedales. In the early 1930’s he began to breed and race horses. About the end of the Second World War he became depressed about his seeming lack of success as a farmer. He sold his racehorses, abandoned the stewardship of the Canterbury Jockey Club and his several directorships, and sold Lowry Hills to the government for soldier settlement. He bought a West Eyreton farm, which he named Hambleden, and eventually retired to a house, Tixall, at Woodend.

In retirement Macdonald returned to his interest in history, and agreed to compile a biographical dictionary of colonial Canterbury as an aid to research. He eventually submitted a 12,000 entry with a subject index in 1964.

With two other local graduates of Christ Church College, Oxford, he made a donation which led to his alma mater commissioning the design and construction of a mace for Canterbury University College.

Tall, slim and bespectacled, George Macdonald was of equable temper and possessed a quiet, incisive wit. His domestic life was happy and he said of his wife: ‘She loves her home and is not averse to yours truly’. Macdonald died at Christchurch on 13 December 1967; he was survived by his wife and children. His name and personality survive in his biographical dictionary, a boon to genealogists and perhaps the single most important contribution to the history of Canterbury.

We were recently pleased to receive a visit from the grandson of 2/Lt Macdonald, Ken Macdonald and his wife from New Zealand.