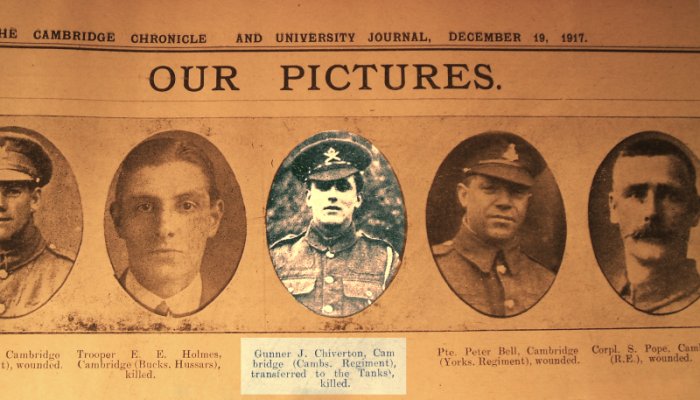 The relatives of Gunner J. Chiverton of the MGC (Tanks) have received news that he was killed in action in France on November 20th, the day after his 20th birthday. Gunner Chiverton, who was the only son of Mr and Mrs J. Chiverton, of Harlesden, (late of Thoday St, Cambridge) joined the Cambridgeshire Regiment in April 1915, and went to France the following September. He was gassed in September 1916, and on his recovery was transferred to the MGC (Tanks), returning to France last June. Letters to deceased’s father and to Miss Coote, 9 Godestone Road, Cambridge, from his superior officer, pay great tribute to Gunner Chiverton’s work with the tanks, and tell of the high esteem in which he was held by officers and comrades alike, especially by the writer. One letter describes him as a splendid fellow, a willing worker, and a cheerful comrade. Gunner Chiverton was killed instantaneously by a shell during the big battle on November 20th and buried two days later with others of his comrades who were killed. The writer adds that a cross to his memory was be erected shortly.”

His family came from the village of Cherry Hinton, just east of Cambridge, where he enlisted in the Cambridgeshire Regiment, before transferring to the Tank Corps.

The Medal Rolls indicate that he went to France in September, 1915, when he was just short of 18. The minimum age for serving overseas was then still 19, but enlisting under age was not uncommon.

His father, also called Joseph William, was described as a ’tinman’ or ‘fitter’ in official documents, and also came from Cambridgeshire but the family travelled, presumably as Joseph senior looked for work.

Gunner Cheverton, for example, was born in Coventry, and in 1901 he was living at Mildenhall in Suffolk with his mother Rhoda whilst his father was lodging in Reading.

By 1911, and the last census before World War I, the family was settled in the city of Cambridge, at 73 Thoday Street – mother, father, Joseph and his three sisters, Rhoda Esther, Annie Jane and Marion.

Gunner Cheverton’s grandfather, another Joseph, was married to Jane and born in Norwich. In 1871 he was living in Cherry Hinton, his occupation of ‘Porter County Asylum’, means he worked at nearby Fulbourn hospital.

The other sisters married after the war: Annie Jane to Joseph Cottam in Stockport in 1919, and Marion to Thomas E. Stenson in Willesden in
1924.

Gunner Cheverton had two uncles who also saw service: Herbert Edward Cheverton served in the Royal Navy, and Bertie Louis Cheverton enlisted in the Rifle Brigade and served in the war in the RASC. Both came from Cherry Hinton.